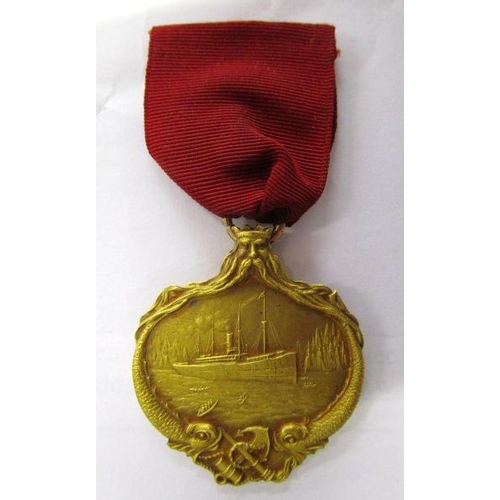 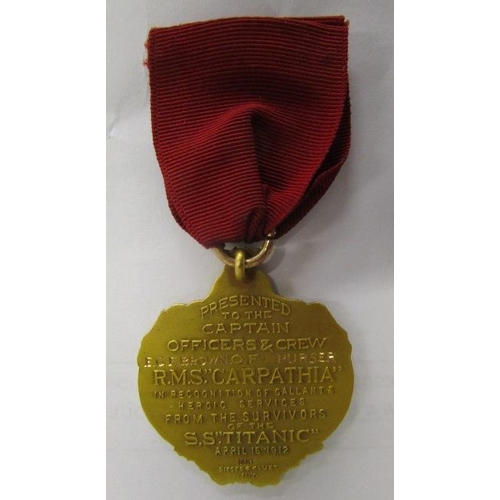 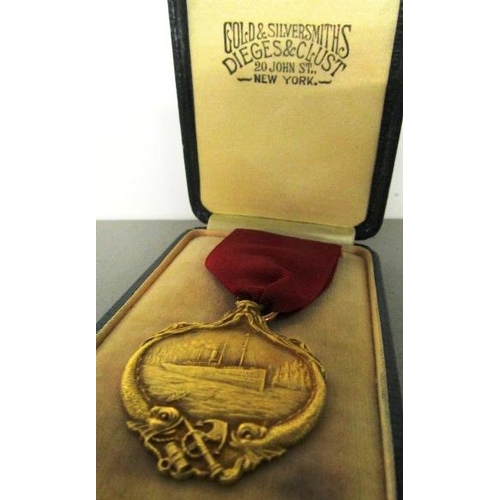 Titanic Interest - The Carpathia Medal, 14 k yellow gold named to E G F Brown, Purser, with suspension ring, on a red ribbon, the medal depicting Carpathia heading towards the Titanic survivors in lifeboats, with icebergs behind, above the head of Neptune with dolphins emerging from his beard, curving down to a crossed anchor and broken spar, the reverse reading 'Presented to the Captain Officers & Crew of RMS Carpathia in recognition of Gallant and Heroic Services from the Survivors of the SS Titanic - April 15th 1912, 14k Dieges L Clust NY', in original Dieges & Clust black leatherette pasteboard box with cream satin lining, as issued, 39mm long (medal), total weight 16.4g
The medal was awarded by the Titanic Survivors Committee, only 14 medals in gold were given to the Captain and Senior Officers of the Carpathia, the Junior Officers receiving silver and the rest of the crew bronze
Catalogue Note: - Ernest G F Brown was born in 1885 in Liverpool and was 27 years old when the Titanic sank. He signed on to the crew of the Carpathia on 7th Feb 1912 from the Ship SS Ivernia, In recognition for his outstanding contribution to the survivors of the Titanic, he not only received the gold medal from the committee, he also received fifty guineas from the White Star Line (with Cunard's permission) and from the Liverpool shipwreck and Humane Society, a coloured lithograph presentation certificate and bronze medal

Fees apply to the hammer price:

Other Lots in this Auction 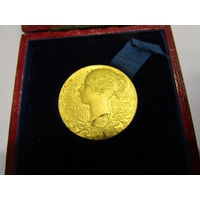 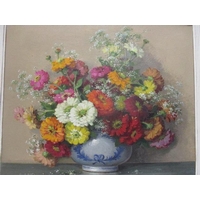